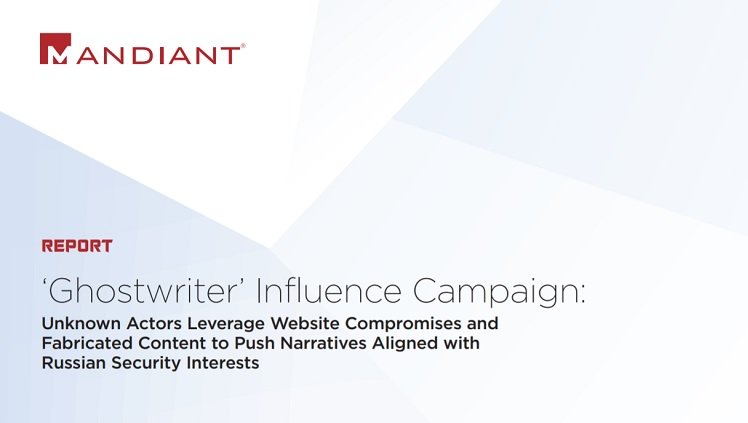 FireEye Mandiant has named this campaign ‘Ghostwriter’ based on its use of inauthentic personas posing as locals, journalists, and analysts to post articles and op-eds referencing the fabrications as source material to a core set of third-party websites.

The operations have primarily targeted audiences in Lithuania, Latvia, and Poland with narratives critical of the NATO presence in Eastern Europe, occasionally leveraging other themes such as anti-U.S. and COVID-19-related narratives as part of this broader anti-NATO agenda.

Many, though not all of the incidents we suspect to be part of the Ghostwriter campaign, appear to have leveraged website compromises or spoofed email accounts to disseminate fabricated content, including falsified news articles, quotes, correspondence and other documents designed to appear as coming from military officials and political figures in the target countries.

This falsified content has been referenced as source material in articles and op-eds authored by at least 14 inauthentic personas posing as locals, journalists and analysts within those countries. These articles and op-eds, primarily written in English, have been consistently published to a core set of third-party websites that appear to accept user-submitted content, most notably OpEdNews.com, BalticWord.com, and the pro-Russian site TheDuran.com, among others, as well as to suspected Ghostwriter-affiliated blogs.

Some of these incidents and personas have received public attention from researchers, foreign news outlets, or government entities in Lithuania and Poland, but have not been tied to a broader activity set. Others have received little attention and remain relatively obscure. Mandiant Threat Intelligence has independently discovered several Ghostwriter personas and identified additional incidents involving some of those personas previously exposed.