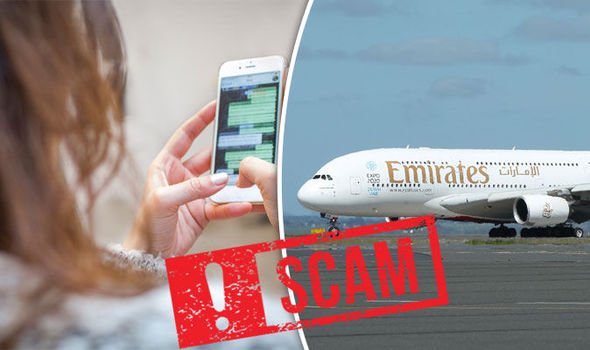 Emirates airline has been investigating an online scam being circulated on social media since Monday. Malicious phishing works by inviting users to click on a link which when pressed, gives permission of sorts to illegally hack into a user’s online device resulting in everything from identity theft to draining a person’s bank account or credit cards.

Emirates airline is warning that it will take “appropriate legal action” against those promoting fraudulent competitions and prizes that have nothing to do with the airline.

The latest variation of the hoax – which was shared widely on UAE social media – took users to a fake website which promised to give away 259 tickets to those who take part in a brief survey. Recent WhatsApp messages noted that the promotion was being held to mark the 30th anniversary of Emirates – even though Emirates was celebrating its 31st anniversary on Tuesday.

The fake survey dated May 29, offers two free air tickets to those who participate. Featuring a large logo of Emirates in the centre of the page, the scam reads: “Congratulations! You have been selected to take part in our short survey to get two free Emirates tickets. We only have 332 tickets remaining so hurry up.”

The airline said, in a statement to Gulf News, that it is aware of phishing attempts luring unsuspecting users to click on fraudulent items such as a survey to potentially gain access to users’ smartphones and computers. The latest phishing scam doing the rounds on Facebook presents itself as an Emirates survey asking three questions, including ‘Have you ever been a traveller with us?’

“Emirates has become aware of fraudulent websites purporting to come from the company claiming to offer free airline tickets to those who take an online survey,” said an Emirates spokesperson. “We advise anyone not to click on any links or share these links on social media. Emirates is investigating the source of the scam and will take appropriate legal action against the perpetrators.”