5 pitfalls a new CIO should avoid 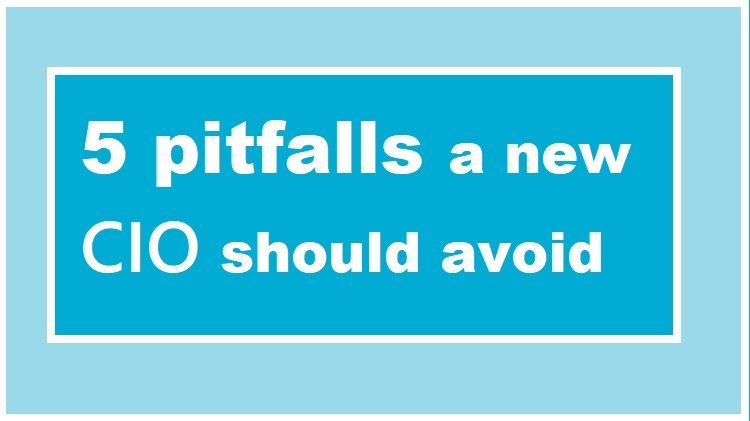 CIOs can learn from common early mistakes to set themselves up for success in a new role as it can be difficult to predict exactly how your first day as a CIO will go. Whether you’re new to the CIO role, or a seasoned professional, the first day will have some surprises, a few expected challenges, and probably lots of paperwork to read . It’s a given that you want to succeed in this new role, but to do so, you must first avoid common pitfalls of a new CIO.

“On your first day as the new CIO, there are some potentially damaging situations that open up in front of you,” says Kelly Calhoun Williams, VP Analyst, Gartner. “The good news is that serial CIOs have experienced them over and over, and you can be prepared.”

No. 1. Redirect ego into efficacy
While you’ve proven yourself to those who chose you for the role, you’re an unknown quantity to your team, stakeholders, peers and vendors. Resist the urge to establish your credibility by sharing success stories from previous roles.

Step slowly through the familiarization process with confidence, but with a contained ego and minimal bravado. Even if you have a flawless track record to date, re-establish your brand and value proposition sensitively from scratch to become a trusted leader.

No. 2. Hey, I’m on your side
It’s possible that one or more of the inherited team of direct reports, peers or stakeholders applied for the role — or even acted as interim CIO — but failed to be appointed. Those applicants are probably disappointed, perhaps hurt and resentful. They may think you don’t deserve the job. It’s a very common situation.

Pay immediate extra attention to thwarted applicants for your role to convert them, or help them find a role elsewhere. The reality is that they often move on anyway.

No. 3. Look before you leap
Whether it’s stopping or starting a big, visible initiative or replacing key people during transition, poor early decisions are a common way to set yourself up for failure. Remember that unless a serious crisis is unfolding, a few more weeks won’t make a significant difference but acting too soon may cause lasting damage requiring rework, redesign or repair.

No. 4. Hold your fire
New CIOs often fall into the trap of letting slip early criticisms of the previous CIO, but the IT team and others may feel that the criticism is also aimed at them. Be assured that your beginner’s mind and critique as new CIO are highly valued, but hold your criticism for maximum accuracy and impact when you’re confident you can make improvements.

No. 5. Find wise counsel
Before you start, assemble a small, trusted group of counselors drawn from people who know you well — experts in your industry and powerful people in your new organization invested in your success. Otherwise, you risk trusting the wrong people for political advice. This could lead you to make grave missteps, running up against the new organization’s culture, norms and policies.